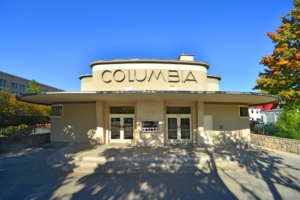 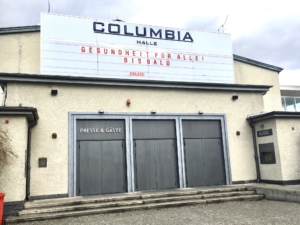 The historic Columbia Theater has been restored to its original 1950s ambience. Opened in 1951 opposite Tempelhof Airport as an allied cinema by the US Air Force, this jewel remained closed to Berliners for a long time. After the Americans left, the building complex was returned to the city of Berlin, the cinema was closed and lost its importance. In 1998, the former cinema hall was initially converted into a club, which was to write club history in the following years as ColumbiaFritz. From 2002, the building was known as Columbiaclub or C-Club. In 2015 – lavishly restored, technically brought up to date, the 1950s rough diamond shone in new splendor as the Columbia Theater.

Since then, the Columbia Theater has used its space for happenings of all kinds and forms: Concerts, proms, fashion shows, sporting events trade shows… the list goes on. The theater is equipped with its own sound and lighting system and seats about 800 people inside, unseated. Outside, you’ll find a large summer garden that’s great for barbecues or similar activities, like weddings or company summer parties. The direct access to the parking lot as well as the loading door, which is at ground level, makes it easy to set up any event.
In the backstage area you will find 3 charismatic rooms for artists as well as 2 production offices that can be supplied by their own kitchen. This and the quick accessibility of the stage allow even the organization of large shows with several bands, like small indoor festivals.

Built in 1951 as a gymnasium for stationed U.S. soldiers and visitors, the Columbiahalle has been a versatile, established event location in Berlin’s Tempelhof district right on the border with Kreuzberg since 1998.

Numerous artists and event organizers have already realized and successfully carried out their concepts here. It is ideal for concerts of all kinds. However, other events such as comedy shows, trade fairs, graduation balls, presentations, company parties, sporting events, fashion shows and showcases can also be ideally implemented here.
With a capacity of up to 3500 standing places, it appears spacious and at the same time very intimate. It offers a good view of the stage from all perspectives. Seating in the hall is possible downstairs as well as on the tier.
It is one of the most impressive and intimate venues of its size in the heart of the capital.
For the physical well-being five bars are available, which can be reached quickly from all areas, as well as a barbecue station in the garden. The beautiful outdoor area, which is often integrated into event concepts, rounds off the entire complex around the Columbiahalle.